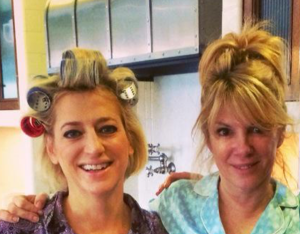 Although Real Housewife of New York City Ramona Singer and rumored new addition Dorinda Medley look happy in photos, they are apparently feuding behind the scenes. This is according to a new RadarOnline.com article. What did a source close to the show tell Radar?

The source claims, “Ramona is drawing a line in the sand, and demanding that Dorinda not be made a full-time housewife. It’s bad enough for Ramona that Dorinda at this point will have a recurring role. The ladies had been close friends before Dorinda joined the show, but now Ramona is completely freezing her out.”

The source continued, stating that, “Ramona is insanely jealous of Dorinda because of her wealth and social status in New York society. Out of her mind with craziness, Ramona has even told Bravo to cut Dorinda out of the upcoming season!”

The source wrapped up with telling Radar that “Dorinda had wanted to be on the show for a very long time, and simply used Ramona in a weak moment to get it done. amona was fearful the show would be canceled because of lagging ratings, and she thought Dorinda would be a great fit. If she had to do it again, she wouldn’t!”

We’re not sure what to make of this, but we have heard this rumor quite a lot lately. What do you think about this? At any rate, it should make for an interesting season if they explore this drama on the cameras.

Andy- I Didn't See How Kim Zolciak Fit In On RHOA

Stephen Collins- I Deeply Regret What I Did