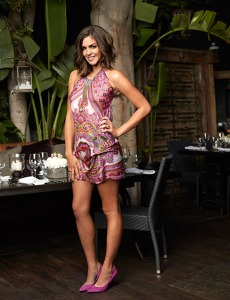 While Vanderpump Rules star Katie Maloney was not directly involved in the drama last night, she still took to her Bravo blog to share her thoughts on the “girl from Miami” appearing. What did Maloney have to say?

Maloney writes, ” I do not for a minute believe her story, aside from the fact that she did meet and hang out with the boys in Miami. I don’t feel like delving into the semantics of it all, but it virtually doesn’t add up. Watching Kristen wither while she spoke and chug wine as if Tom cheated on her with this girl was comical really. I’m still trying to figure out what Kristen feels she has to gain by orchestrating this whole thing, besides some karmic punishment. Why did she want to break Tom and Ariana up so bad? Does she realize that even if this were true that the fate of Tom and Ariana’s relationship is THEIRS to decide? And if they were to break up, does she think that this would win Tom over? I’m seriously at a loss here. We had just come off an amazing trip and everyone was in a great place and this week was leading up to Scheana and Shay’s wedding and Kristen decides to do this NOW?!”

She continued, stating that, “It sounds like Annemarie (the girl from Miami) was reading lines as she spoke. No conviction in her voice. I understand why Tom ran away when he saw her. First of all, he was blindsided by this girl he met once in Miami who decided to fabricate a story. Now this is just plain creepy. She has taken it to new levels by showing up at his work like a crazed stalker. I don’t blame him for getting out of there. He doesn’t owe her anything and doesn’t need to give her the time of day. On the other hand, to those who want to believe he cheated, the fact he ran away incriminates him further in their eyes. This is why I said it’s not a good look to run away, because he didn’t cheat and giving anyone the satisfaction of believing he did just makes the matter worse. It’s tough because when people are accusing you of cheating and you really didn’t, you want to just ignore it and not let it get to you, because if you do, then you will look guilty. But on the other hand, when you are being accused of something you didn’t do it’s really frustrating and you want to fight to prove your innocence, which can also make you look guilty. It’s a double-edge sword. It’s nearly impossible to handle and correct this situation when people are shoving it in your face.”

“Thank god Tom and Ariana came back to work and apologized to Lisa,” Maloney wrapped up with saying, adding, “I loved the way they handled the second attempt by Annemarie. It further proves that the story this girl is spewing is complete garbage, and they aren’t going to let her try and shake them. This girl has no purpose aside from wanting attention. I don’t know anyone that would travel cross country to go and confront someone who they claim to have had a horrible one-night stand with. So I’m sorry Annemarie, but you’ve just wasted your time.”

Maloney is clearly not fearful of the drama, as last week she outed text messages with Stassi Schroeder on social media.

What do YOU think about what Maloney wrote? Let us know!