Brandi Glanville- I Don’t Have A Drinking Problem! 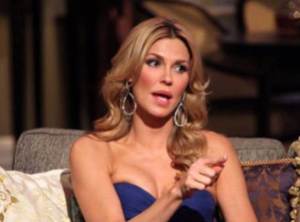 It has been a popular topic of conversation among The Real Housewives of Beverly Hills that housewife Brandi Glanville has a drinking problem. In fact, co-star Lisa Rinna even went as far as to claim that Glanville is masking her pain with alcohol!

This morning, Glanville appeared on Access Hollywood and addressed the claims she has a problem with alcohol.

What did she say?

Glanville stated, “I think it’s an easy bandwagon to jump on (calling me an alcoholic) because you’ve heard it seasons before. There’s really nothing else going on. If they’re not talking about me, what are they talking about.”

“I know myself,” she insisted, adding that, ” it’s that third glass of wine where I go to the dark side. I know when to stop, but when you’re shooting a reality show and no one is doing anything, sometimes I just drink to make it more interesting for myself and for my viewers.”

Glanville, who claimed her last drink was a glass of wine on Superbowl Sunday, also discussed how she felt Celebrity Apprentice was a benefit to her image, explaining that, “I was happy that people finally got to see a different side of me. On Housewives all we’re doing is socializing and drinking… you don’t see the business side of me. I was really happy to have this on Monday nights so people could see I really do other things. I’m not just that crazy girl who drinks around a bunch of middle aged women so that something happens.”

It’s nice to see Glanville reflecting on Celebrity Apprentice in a positive manner, as she had previously claimed the show gave her panic attacks.

While Glanville may not think she has a drinking problem, fellow Housewife Eileen Davidson thinks she is reckless.

What do you think about what Glanville said? Do you think she has a drinking problem or not? Let us know in the comments!

EXCLUSIVE: Kyle Richards- Brandi Is Using My Sister To Mask Her Own Issues

I think she needs help – you cannot just go about saying whatever you like, hurting people because you are hurting. No dignity, no class, no integrity – in fact this girl needs an intervention!

Brandi is a drunk and she has emotional problems , very insecure she does need help , sooner or later …she may come out of denial.